Our activities / Context of intervention / Conflict and war
Get involvedDonate now 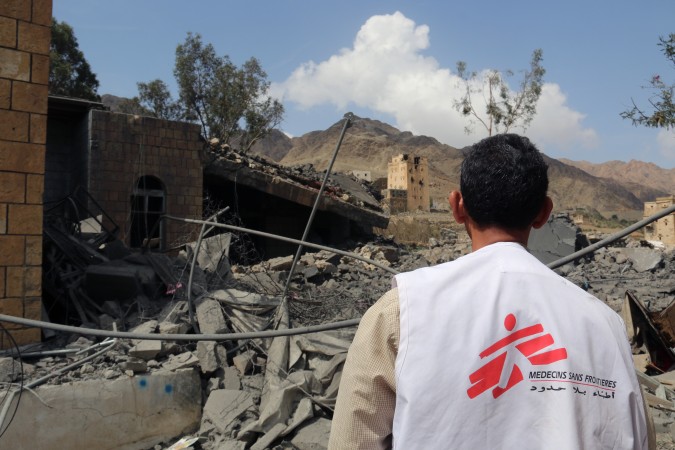 In warzones, MSF does not take sides. We provide medical care based on needs alone, and work hard to reach the people who most need help. If warring parties see us as being on one side of a conflict, we are less likely to gain access to those in need and more likely to be attacked. One of the ways we are able to demonstrate our independence to warring parties is to ensure that all our funding for work in conflicts comes only from private individuals, not from governments.

Conflicts, be they international wars or internal disputes, can have many consequences. Fear of violence or persecution uproots entire communities and, for those who stay, many are often left without access to medical care.

Conflicts normally lead to a rise in trauma injuries, but also lead to problems for people needing routine medical care, such as for complications with pregnancy or chronic diseases such as diabetes. Psychological distress and mental illnesses often increase. Sexual violence is also common in conflicts. We try to fill these gaps with highly experienced doctors, nurses and logisticians who provide specialized medical care and logistical support.

During times of intense violence, our teams often have to work with a great deal of flexibility. In 2011, with ongoing violence engulfing medical facilities in Misrata, Libya, an MSF team had to find a way to safely and quickly evacuate a large number of severely wounded patients from the city.

The team chartered a fast passenger ferry, removing its seats so that plastic sheeting and mattresses could be laid and intravenous lines set up.

“The violence caused an influx of wounded people and it was fortunate we could be there and get them onboard,” said Helmy Mekaoui, an MSF doctor who coordinated the medical evacuation.

Despite the rough seas, the boat safely arrived in Tunisia the following day with 20 ambulances waiting to take the 71 patients to the hospital.
MSF logistician Annas Alamudi explains: “As far as I’m concerned, it was a successful operation and I’m glad we could help. There were sick people who needed to get out, and we got them out. Job done.”

Working in a war zone can be a frightening, stressful and disturbing experience. Because of this, we exclusively send highly trained and experienced staff who have specifically volunteered to work in such situations.

Paul McMaster, a British surgeon who works extensively with MSF, still finds high security missions challenging. After returning from a mission in Syria where he treated the wounded in an operating theatre set up in a cave, he said: "I've worked in many difficult places with MSF — war zones like Sri Lanka, Ivory Coast and Somalia — but while in those countries it was dangerous on the ground, in Syria the danger always comes from the air. It’s a much more oppressive type of danger, having a helicopter hovering in the sky above you."

Mental health needs grow after 100 days of war in Ukraine

After 100 days of war in Ukraine (3 June), MSF has been providing mental health support in shelters for displaced people, at mobile clinics in remote villages, and in urban metro stations.In the past months, MSF has observed that the war, especially the indiscriminate shelling and military occupation of certain areas, has caused serious psychological issues for the men, women and children.

“The severity, scale and speed of the war in Ukraine have created simply enormous needs and suffering,” says Dr Joanne Liu, an experienced paediatrician and member of MSF’s emergency response team who is just back from Ukraine.