Our activities / Our medical approach / Ebola
Get involvedDonate now 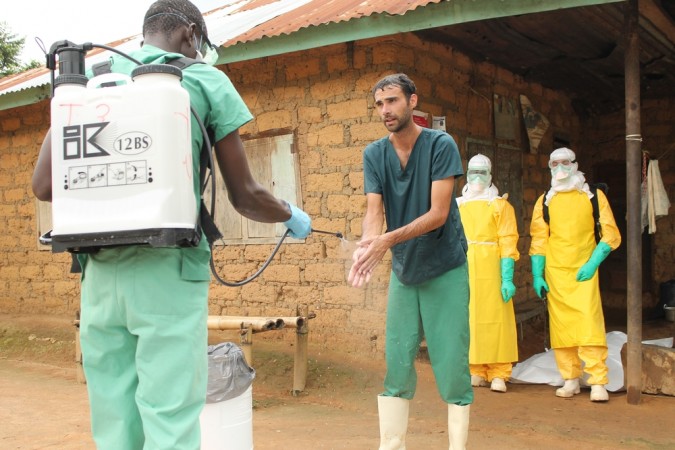 Ebola is a virus that is transmitted through direct contact with blood, bodily secretions, organs and infected people. Ebola first appeared in 1976, and although its origins are unknown, bats are considered the likely host. Early 2014, an Ebola epidemic broke out in Guinea. It then quickly spread to other countries in West Africa: Sierra Leone and Liberia.

The Ebola outbreak in West Africa killed 11,315 people after being officially declared on 22 March 2014 in Guinea.

On 22 December 2016, the results of an experimental Ebola vaccine trial were released by the Lancet. The trial found the vaccine to be highly effective in protecting people against the Zaire strain of Ebola.

“This vaccine will be a powerful tool to help prevent the spread of the Zaire strain of Ebola and to protect health workers," said MSF President Dr Bertrand Draguez.

"MSF will try to make use of it in any future outbreak of the disease. More research is still needed to determine the length of protection that it offers to people and into vaccines for other strains of Ebola. Progress also still needs to be made in improving the treatment of patients once they are infected with Ebola, to make sure more lives can be saved.”

If contracted,  the Ebola disease is one of the deadliest in the world. It is a highly contagious virus that can kill up to 90 percent of people who catch it, causing terror among the infected communities.

Humans and animals can catch the disease. At funerals, the deceased can also transmit the virus to the be-reaved in case of direct contact with him.

KILLER DISEASES | A History of Ebola

Initially, there are no specific symptoms, making diagnosis difficult. The disease is often characterized by the sudden onset of fever, weakness, muscle pain, headache and sore throat. These symptoms are followed by vomiting, diarrhea, rash, kidney and liver failure and, in some cases, internal and external bleeding.

There is no specific treatment or vaccine for this virus. While vaccines are currently in development, there is no treatment for the virus and patient care is centred on hydration and treating the symptoms such as fever and nausea.

Treatment is limited to supportive therapy which involves hydrating the patient to maintain his level of oxygenation and his blood pressure and treat any infectious complications. Today, there is only a preventive vaccine which permits the control of an epidemic before it starts.

Preventing transmission is essential: patients are treated in Ebola Treatment Centres, where strict infection control procedures are in force. Identifying those people the patient was in contact with when they were ill becomes a priority, as do safe burials. Community health promotion is also undertaken to inform the community about the threat and how to try and keep themselves safe and what to do if they develop signs.

KILLER DISEASES | How the Body Reacts to Ebola

KILLER DISEASES | Ebola in the Future

MSF treated 910 people for haemorrhagic fevers, including Ebola, in 2019.

The Ebola epidemic continues to spread through the Democratic Republic of Congo (DRC)’s North Kivu province. Our teams continue to strengthen their efforts to help bring the epidemic under control.

“Ebola is about human beings and trust”

New drugs, which might help cure those who have contracted the virus, are available, but offering and administering these drugs, says Dr Hilde De Clerck, is not as easy as it may seem.