Ten years after earthquake, health structures are on the brink of collapse

A patient is resting in the courtyard of the Tabarre hospital, which specializes in trauma emergencies. December 2019. Haiti. © Leonora Baumann
All news

Health structures are on the brink of collapse
Get involvedDonate now

Ten years since a devastating earthquake struck Haiti, MSF is paying tribute to the earthquake’s victims and highlighting the current deterioration of the medical care in the country, in a report released today.

Ten years since a devastating earthquake struck Haiti, MSF is paying tribute to the earthquake’s victims and highlighting the current deterioration of the medical care in the country, in a report released today.

“The catastrophic earthquake killed thousands of people, displaced millions, and destroyed 60 percent of Haiti’s already dysfunctional health system,” said Hassan Issa, head of mission with MSF in Haiti. “Ten years later most medical humanitarian actors have left the country and Haiti’s medical system is once again on the brink of collapse amid an escalating political and economic crisis.”

On January 12, 2010, the magnitude 7.0 earthquake devastated Haiti. MSF, which had been present in Haiti for 19 years prior to the earthquake, lost 12 employees that day, and two of the three MSF-supported medical facilities were seriously damaged.

In response to the urgent and almost unlimited needs of the population, the organization mounted one of its largest-ever emergency operations, treating more than 350,000 people affected by the earthquake in just 10 months.

Interview with two MSF employees who survived the 2010 earthquake

Ten years later, as economic troubles and political tensions have intensified, medical facilities—including those operated by MSF—are struggling to meet the needs of patients. The report, Haiti Ten Years On, highlights the challenges for medical facilities to function in the face of political and economic strife.

Since a hike in fuel prices in July 2018, which spurred the crisis, medical facilities have struggled to provide basic services due to shortages of drugs, oxygen, blood, fuel and staff.

“The international support that the country received or that was pledged in the wake of the earthquake is now mostly gone or never materialized,” said Sandra Lamarque, MSF head of mission. “Media attention has turned elsewhere as daily life for most Haitians becomes increasingly precarious due to raging inflation, lack of economic opportunities, and regular outbreaks of violence.”

In 2019, Haiti experienced multiple months-long countrywide shutdowns (known as “peyi lok”). Streets were blocked by barricades made of burning tires, cables, and even walls built overnight that hindered the movement of ambulances, health care workers, medical supplies, and patients.

In 2019, MSF's emergency stabilization center in the Martissant area of Port-au-Prince received an average of 2,450 patients per month, 10 percent of whom had gunshot wounds, lacerations, or other injuries from violence.

MSF's burn treatment hospital in the Drouillard area of Port-au-Prince saw a peak in activity in September, when it admitted a total of 141 patients with severe burns, primarily caused by accidents.

In Delmas where MSF runs a sexual and gender-based violence (SGBV) clinic, there was a drop in the number of patients during this period of heightened violence, simply because it was too hard for patients to reach the facility.

In rural areas, such as Port-à-Piment in the South department, the effect of the crisis on the Haitian health care system is painfully visible. MSF has long supported emergency and maternal health services in the area.

In severe cases, when hospitalization is necessary, MSF now struggles to find an open facility where it can refer its patients. The South department’s main hospital and blood bank both closed in October after being looted and are still not fully functional.

MSF now regularly transports patients in critical condition up to five hours to find a hospital that can accept such cases. In the North department, where MSF was about to open two SGBV clinics, activities had to pause due to access issues and lack of fuel.

We now need others to pay attention to the current medical needs in Haiti.
Hassan Issa, MSF head of mission in Haiti

In response to the deepening economic and political crisis, MSF has launched new initiatives to care for patients when the Haitian medical system cannot cope.

In November, MSF reopened a 50-bed trauma center in the Tabarre neighborhood of Port-au-Prince. In its first five weeks, the trauma center received an overwhelming 574 patients. One-hundred fifty people suffering from life-threatening injuries were admitted—57 percent of whom had gunshot wounds.

The organization has also reinforced its assistance to the Ministry of Public Health and Population by organizing donations of medical equipment and material, rehabilitating facilities, and training staff at Port-au-Prince’s main public hospital, as well as supporting a hospital in Port Salut in the South department and 10 health centers throughout the country.

“We knew we were meeting a need here in terms of serious and urgent cases, but obviously the situation is even worse than we imagined,” Issa said. “We now need others to pay attention to the current medical needs in Haiti.”

As we highlight the medical challenges and scope of medical care provided in Haiti in the past 10 years, ...

download
In the wrong place at the wrong time: testimony of Anderson Alexandre

A 30-year-old father living with his wife and two children, Anderson Alexandre was shot and injured on Saturday, December 21, 2019, in the Delmas district of Port-au-Prince while he was out buying water for his family.

“I entered my home. It was around 11:00 p.m. Since there was no water at home, I went out to buy it. I didn't want to sleep without having water available. As I waited for the change, I heard bursts of fire. A car was driving down the street and someone was shooting people. Despite my reflex to lie on the ground after hearing the shots, I was hit by two bullets in my right foot.”

Several people were injured. One person, riddled with bullets, died near him.

“I feel like they wanted to kill us all. I pretended to die for fear that the shooters would see that I was still alive and decide to end my life completely. The shooting continued while I was lying on the ground. The body of the deceased person protected me a little bit from the bullets. Otherwise, I would have been injured more seriously.” 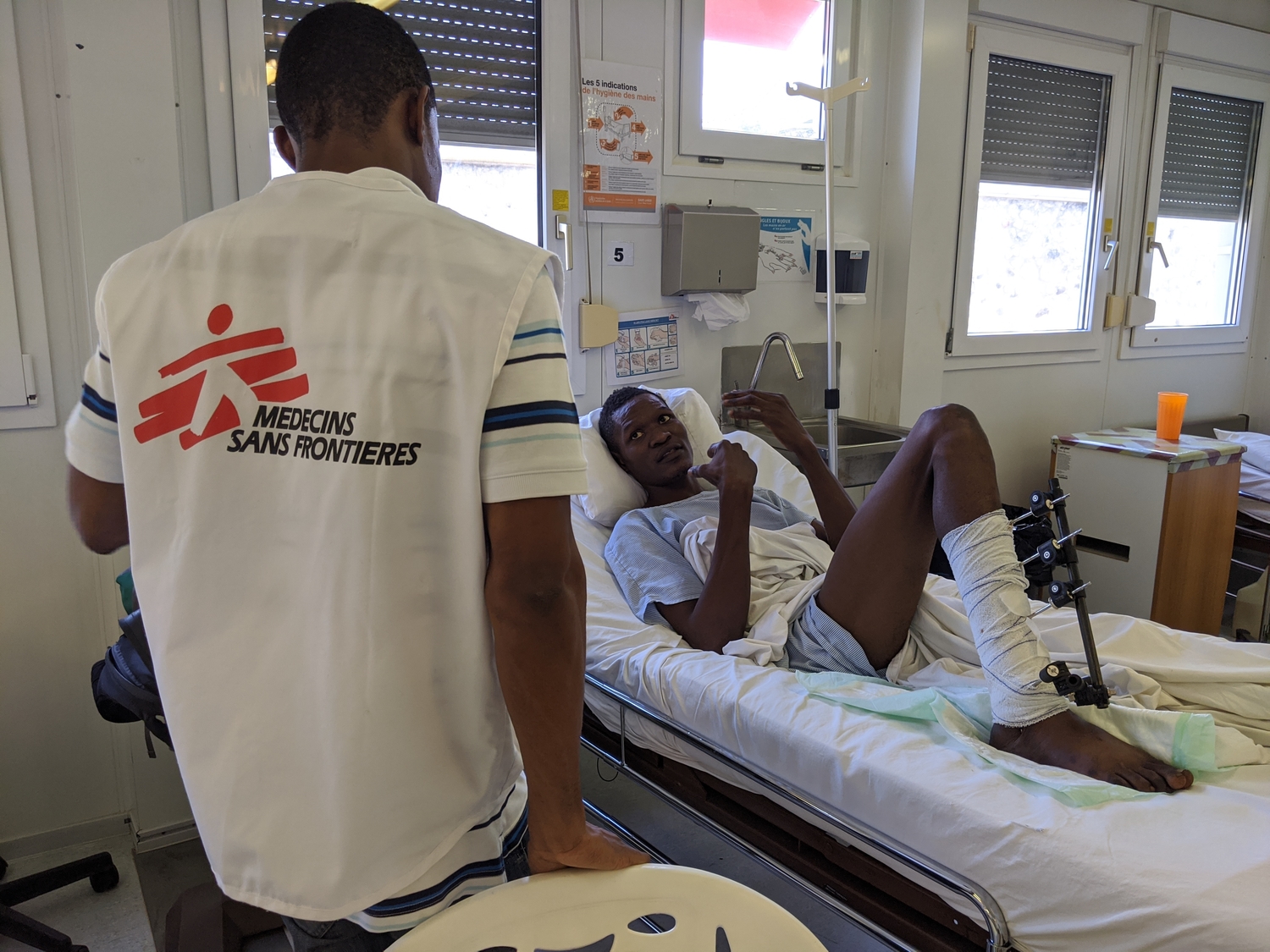 Anderson Alexander recalls the details of the shooting that sent him to MSF’s Tabarre hospital. December 2019. Haiti. © Nico D’Auterive / MSF

Anderson’s wife was quickly made aware of the situation, and an ambulance was called.

“Intuitively, I asked to be taken to the MSF hospital. Fortunately for me, doctors were available. I was operated on the same evening. At first, it was very difficult for me because the event was traumatic. I did nothing but eat for almost five days. But with the support of other patients, I am beginning to overcome the difficulties. We laugh and support each other.”

Anderson works as a security guard for a company. He says he fears the days to come, since he will not be able to support his family.

“They will surely remove me from my job. My daughter is very young. And now, I no longer have all my mobility to meet the needs of my daughter. It's a big shock to my health and to my family.”

Despite everything, Anderson only asks for peace so that people in Haiti can move freely without being afraid. He invites others to send messages of peace to help find a solution to the country's problems.