An air strike carried out by the Saudi-led coalition on Sa'ada City Remand Prison in the early hours of January 21 has killed at least 82 people and injured 266, according to the Ministry of Health, with the death toll likely to increase as researchers still comb the rubble.

Two MSF staff who are resident in Sa’ada City and were in their houses close to the prison at the time of the air strike described hearing fighter jets and then three separate explosions.

“There is no way to deny that this is an air strike, everyone in Sa’ada City heard it,” said one of the MSF staff.

I live one kilometre from the prison and my house was shaking from the explosions.”

The Saudi-led coalition has been regularly bombing areas under Ansar Allah control since 2015 and has hit MSF and MSF-supported hospitals five times, along with many other civilian targets.

A Coalition statement called reports that the prison had been hit and detainees hurt “baseless and unfounded”, but an MSF staff member who visited the site of the prison confirmed it had been destroyed, and a second MSF staff member present in al-Gumhouriyyeh Hospital in the city described a hospital overwhelmed with the wounded.

“The hospital is facing a very difficult situation this morning, with casualties lying on the floor,” he said.

There are not enough beds for all of the wounded.”

MSF organised donations of medical equipment to al-Gumhourriyeh Hospital in the immediate aftermath of the air strike and sent a truck with more donations from Sana’a the same day. MSF is working with the Ministry of Health to see how we can further support the hospital deal with this influx of casualties.

This is the latest in a long line of unjustifiable air strikes carried out by the Saudi-led Coalition on places like schools, hospitals, markets, wedding parties and prisons,” Ahmed Mahat, MSF Head of Mission in Yemen

“Since the beginning of the war we have frequently witnessed the terrible effects of indiscriminate Coalition bombing on Yemen, including when our own hospitals have been attacked.”

“In recent days we have witnessed a worrying escalation in the war in Yemen, with many air strikes on Sana’a throughout the week, which have continued this morning,” added Mahat. “The internet has been cut off for most of the country, again reportedly after a Saudi-led Coalition air strike on a telecommunication building in Hodeida.”

“There has also been heavy fighting recently on frontlines throughout the country. All this shows that despite the war having dragged on for seven years the end of suffering for people in Yemen is nowhere in sight.” 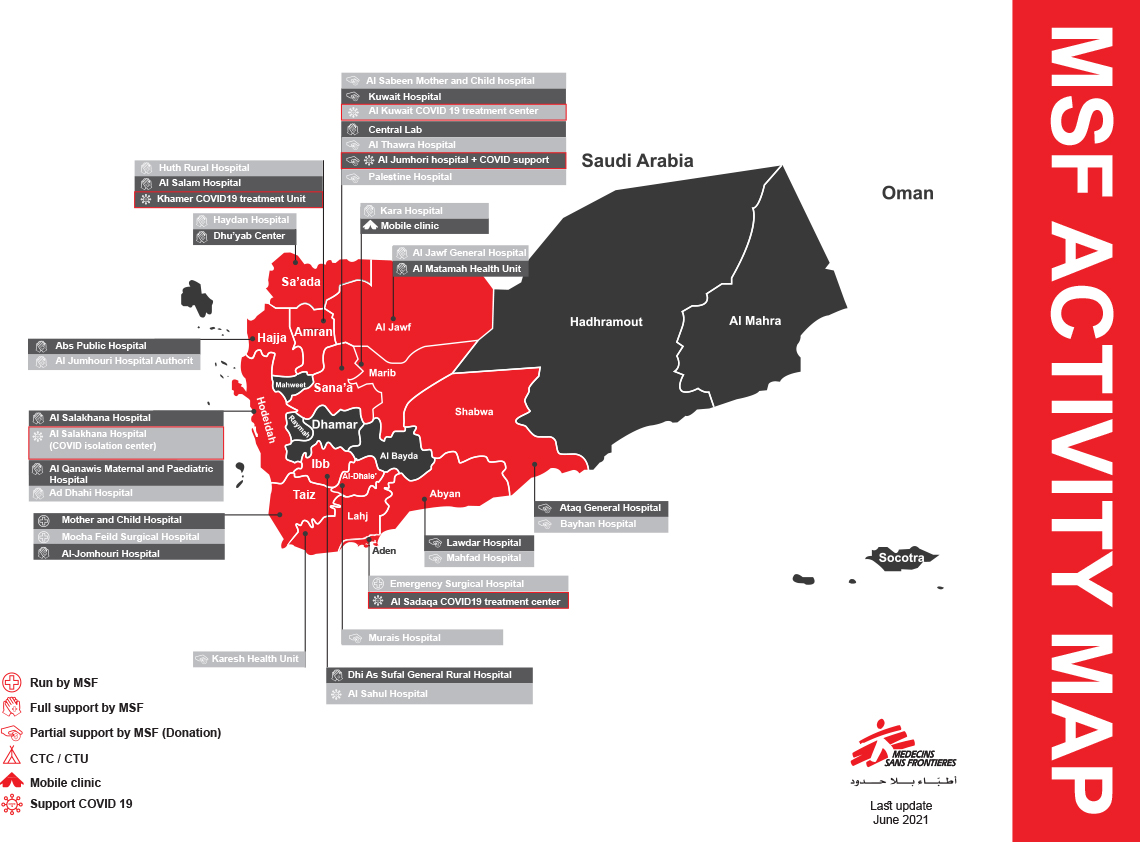 Malnutrition in Yemen: “The situation is worse with every passing day”

MSF teams are seeing a significant increase in the number of admissions of malnourished children to Abs hospital in northwestern Yemen. More than 3,300 children have already been treated since the beginning of the year, in a region where the primary health care system is almost non-existent.

Seeking healthcare in a city split by a frontline

Taiz, Yemen's third most populous city, has been the scene of a fierce civil war since the country's conflict began in 2015. Rocket fire and constant clashes have damaged the economy and health system to the detriment of the population, who are trapped on both sides of the front line.